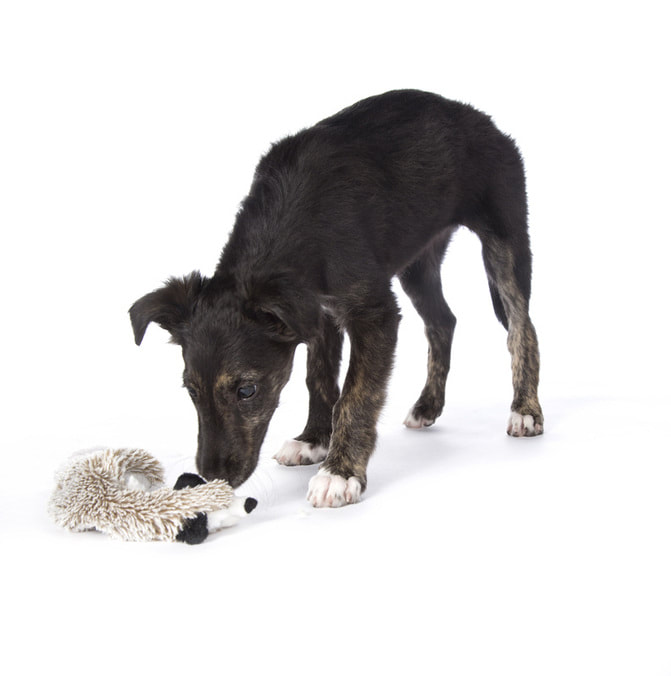 GENERAL APPEARANCE: The Silken Windhound is an elegant, small to
medium-sized sighthound with a moderately long silky coat. Its classic lines and
athletic build are the hallmark of a true coursing dog. When viewing a
Silken Windhound, one has the impression of grace, balance, and strength
integrated with exceptional running ability.

SIZE, PROPORTION, SUBSTANCE:  The accepted measurements for
Silken Windhounds are 18.5 -23.5 inches (47-60 cm) at the withers. Dogs
over or under the ideal shall be penalized to the extent of the deviation.
In proportion, Silken Windhounds are approximately square or slightly
rectangular. Silkens that are excessively longer or shorter than they are
tall should be penalized according to the extent of the deviation.


The build of the Silken Windhound is sleek, through a balanced combination of fine bladed bone and smooth muscle, and never looks frail. Heavy, round, or coarse bone is faulty.

HEAD: The Silken Windhound's expression is alert, friendly and intelligent.  Eyes are rather large and dark, almond-shaped and set somewhat obliquely. Pigment around eyes is full and dark. Ears are small and fine in texture, folded and lying back along the
neck when in repose. When alert, ears may prick or semi-prick. Hanging, or drooping, houndy ears are undesirable. Moderately long in head, the Silken Windhound has a fairly narrow back skull which, when viewed from above, tapers gradually through a full
muzzle to the nose. The muzzle is in good balance to the skull. When viewed from the side, the top plane of the muzzle is parallel to the plane of the flat skull, with a barely perceptible stop between.

The head is well chiseled, skin dry and tight, with noticeable veining. The nose is dark, and may be slightly down-turned at the end. Lips and flews are tight, in keeping with the dry head. Pigment on lips is full and dark. Jaws are strong to accommodate       the teeth, which are large for a dog of this size, with full dentition and scissors bite. Missing teeth should be penalized.

NECK, TOPLINE, BODY: The neck is long and slender. It is slightly arched, well muscled and powerful, never ewe necked.       The neck is free from dewlap or throatiness, widening gradually and symmetrically into the shoulder. The topline rises gradually
from slightly behind the withers, with the highest point of the arch being over the last rib, flowing smoothly over the muscular       loin, carrying through and falling gradually over the long croup.

The back is short and the loin moderately long, wide, muscular and arched. It is important that the loin be flexible to sustain       and drive the double suspension gallop, which Silkens exhibit when running at top speed. A flat back with steep croup is not
a loin arch and should be faulted. The chest is deep with moderate spring of rib. A barrel shaped or slab sided body is faulty. The brisket reaches as nearly as possible to the elbow, with a graceful upsweep to the tuck-up; this creates the distinctive underline
of the Silken Windhound.

The tail is long and flexible, falling in a sweeping curve, free of kinks and reaching past the hock. When carried, the tail should     not rise above the back. A tightly curled or gay tail is faulty.

FOREQUARTERS:   The shoulder blades are well laid back and are long and smooth with flat muscle. Fine withers are preferred. Good return of upper arm is desirable, bringing the legs well under the withers.  Elbows turn neither in nor out. The forelegs are straight and strong, with pasterns straight or slightly bent, but never knuckled over.  Dewclaws on front legs are acceptable. The feet are well knuckled with tough, thick pads. Both the hare foot, with its longer middle toes; and the cat foot, with its shorter middle toes, is acceptable. Hare foot is preferred. Nails are strong and of moderate length.

HINDQUARTERS: Hindquarters are well angulated, with a long second thigh and well developed thigh muscles. Viewed from the rear, the hindquarters are slightly wider than the front, well muscled, without any suggestion of cowhocks. Stifles are well bent,
and hock joints broad and strong. Hocks are short. Rear dewclaws may be removed. The feet are well knuckled with tough, thick
pads. Both the hare foot, with its longer middle toes; and the cat foot, with its shorter middle toes, is acceptable. Hare foot is preferred. Nails are strong and of moderate length.

COAT: The coat is soft, and silky in texture. In no case should the coat be woolly or profuse enough to obscure the outline of the Silken Windhound, nor so long as to interfere with the function of a coursing hound. The coat may be straight, slightly wavy, or curly. There is longer feathering along the back of the forelegs, the brisket, hindquarters, around the neck, and tail. Coat on the face, feet, front of forelegs and hocks are naturally short. Feathering that frames the ears and face adds to the dog's expression, and should not be trimmed. The Silken Windhound is shown in a natural coat with minimal trimming.

COLOR, MARKINGS: All colors and markings are acceptable.

GAIT: The Silken Windhound moves with a smooth effortless trot, which has good reach in front and good drive from the hindquarters. Restricted or wasted motion of the legs or body, when viewed from the side, is faulty. Paddling, hackneyed gait,
toeing in, and toeing out are faults in front movement. The hocks should not roll in or out when rear movement is viewed. While
the hind legs are wider apart than the front, the feet, both front and rear, seek a center of balance closer to the centerline when
the dog moves at a fast trot. Movement which is too wide, or too narrow, or which does not converge towards a centerline, is faulty.

TEMPERAMENT: The Silken Windhound is an intelligent hound of balanced character. While this breed exhibits strong prey drive in the field, they are gentle, affectionate, devoted companion animals in the home. An unwarranted show of timidity or nervousness, or any sign of hostility towards people or dogs, should be penalized.